The community of craftsmen, which dates back at least 1,400 years, was discovered in Rendlesham, Suffolk.

The site is just three miles from Sutton Hoo, described as the UK’s greatest archaeological discovery and portrayed in the hit Netflix film The Dig.

Melted metal fragments and slag found at the Rendlesham site indicate workers were involved in iron smithing and producing items out of copper alloy. 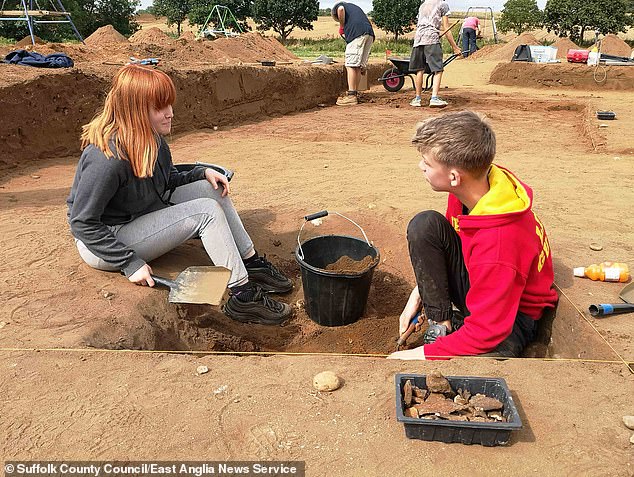 Artefacts made from copper alloy and iron were found in the 88ft burial ship – including an ornate helmet believed to have provided protection in battle while also used as a crown.

The items may have belonged to East Anglia’s King Raedwald, who is widely thought to be the ruler buried in the ship in the 7th century AD.

A Suffolk County Council spokesman said those buried at Sutton Hoo would have ‘probably lived at Rendlesham’, adding: ‘There is also evidence of craft working at Rendlesham, so it is possible they may have produced some of the objects discovered in the Sutton Hoo burial grounds.’

The unearthing of the ship in 1939 changed the narrative of British history as it showed the Anglo-Saxons were far more advanced than previously thought. 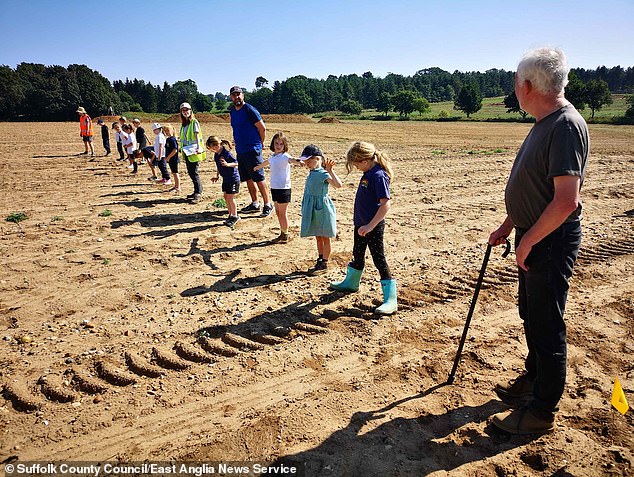 Other artefacts found at Rendlesham include spindle whorls and loomweights used in spinning and weaving, and dress items such as a copper alloy brooch and buckle.

There were also pottery vessels for cooking and storage, and bones from butchered cattle, sheep and pigs. The remains of what may have been a palace for King Raedwald and other Anglo-Saxon rulers was found nearby during excavations betwwen 2008 and 2014.

The latest dig took place this year as the first phase of a four-year project backed by a £517,000 National Lottery Heritage Fund grant. Its exact location is being kept a secret to deter treasure hunters and metal detectorists.

Much of the excavation was carried out by 150 volunteers – among them pupils of Rendlesham primary school and youngsters from the Suffolk Family Carers charity – under the guidance of Suffolk council’s archaeological service and Cotswold Archaeology Ltd.